This past weekend we did our first home visit.  Or maybe I should say visits since we went to the homes of two students: The villages of Ruhega & Karama.

The van was in the garage the entire day we intended to leave, so we ended up leaving much later than expected, but it all worked out okay…even if we did end up eating dinner around midnight…

Friday we held a gathering at the church, where I shared a message from the Scripture that the girls had chosen for their theme: Freedom, Luke 4:18.

The Spirit of the Lord is on me,

because he has anointed me

to preach good news to the poor.

He has sent me to proclaim freedom for

and recovery of sight for the blind,

to release the oppressed 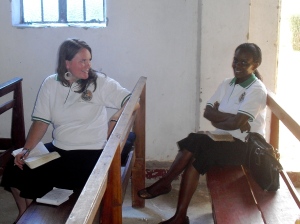 After the service we did some door-to-door ministry, going out in pairs.  I ended up going with Joseline, the director of the ABIDE girls program.  It’s a little tricky to engage in personal conversations about the Gospel when you can’t speak the language…So, Joseline did most of the talking.  I spent most of the conversations praying.  She would translate the gist of the conversation, and I would give my two cents.  While walking from our second house to the third, we noticed

a man in a field with several huge cows, so we decided to talk to him.  We learned his name is Amon, and his wife is born again, but he said he was not. 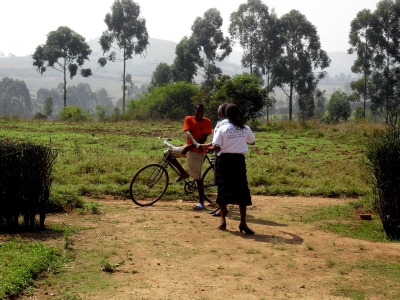 He confessed that he has a major problem with alcohol, and was seeking prayer from us in regards to that.  I immediately was taken back to our theme verses & asked Joseline to share my thoughts with him.  Satan was using alcohol as a way to trap him, to put him in prison.  A prisoner cannot set himself free.  If he tries, he will find himself back in prison after a short time.  Similarly, when we are prisoners to our sin, we can’t get out ourselves.  If we manage to escape, we will find ourselves back in the trap very soon.  A prisoner has to be set free by one with authority; Jesus is the only one who has the authority to set us free from our sins!  This apparently made sense to him, and he decided to accept Christ as his Savior there in the fields.  So, surrounded by grazing cattle, Joseline led Amon in a prayer of salvation.  Please pray for Amon as he begins his journey of sanctification & dependence on Christ to overcome his alcohol addiction. 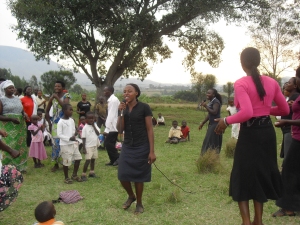 That evening we had a crusade outside of the church with singing, dancing, testimonies, preaching, and people giving their lives to Christ.  We ended the evening by watching Passion of the Christ inside the church.  The place was PACKED, with standing room only. Michael (ABIDE staff member), translated the entire movie for the crowd.  There was a big response from the people. 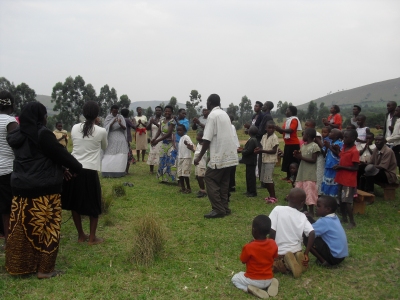 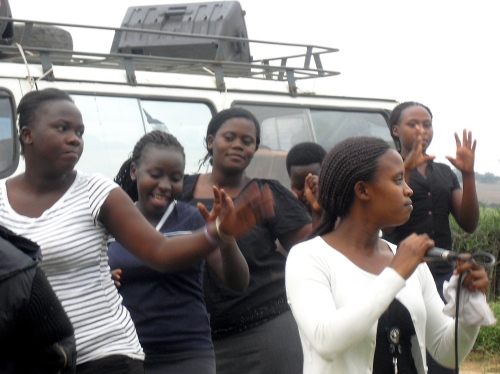 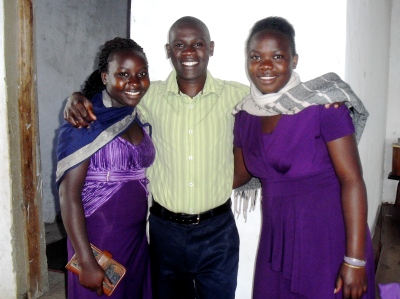 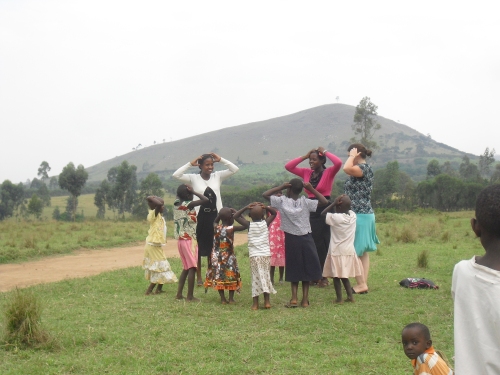 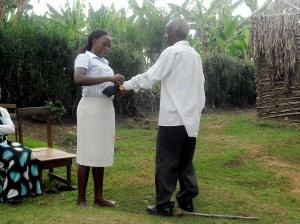 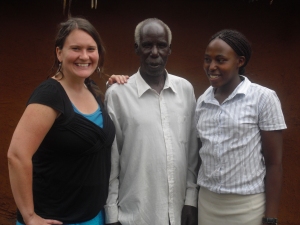 Before leaving Ruhega, we had a nice time with our student’s family.  They were all clearly so proud of her, and it was fun to witness that.  Her grandfather, the community leader, even gave her his watch…it felt like I was witnessing some family ceremony or something!  He was so happy to have me there as well, the first Mzungu (white person) to ever visit the village.  After being completely filled up with excellent food by our gracious hosts over several meals, we headed to the next student’s home. 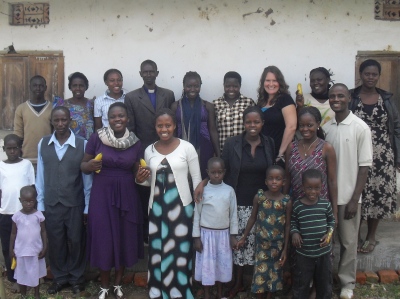 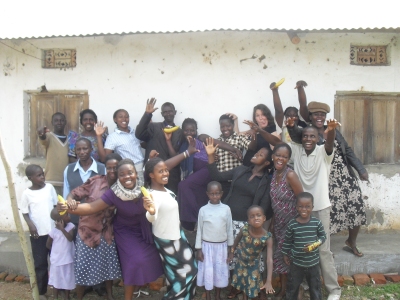 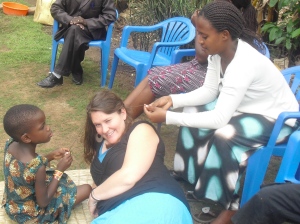 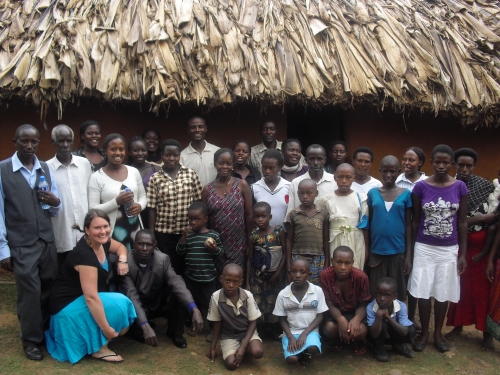 We came to Karama & began setting up for an evening service at the church.  Most of the girls went to the nearby trading center to invite the community.  We held the service and again played 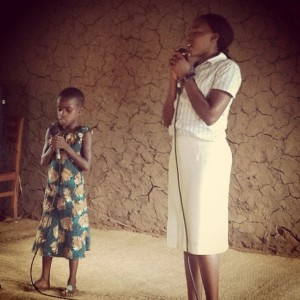 Passion of the Christ.  Even Michael & Joseline’s seven-year-old daughter got involved and took the microphone to help lead worship and pray during the service!  She is an ABIDE student in the making!  The next morning, the girls ran the church service while I played my role of giving children some attention and alleviated some curiosity as they saw 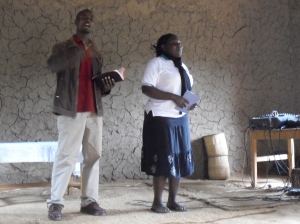 (or even touched) my white skin and long, soft hair.  Her family and church were very welcoming to our team as we visited and ministered. 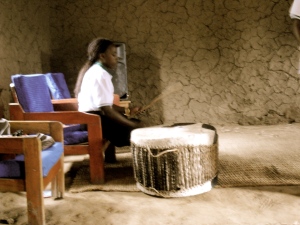 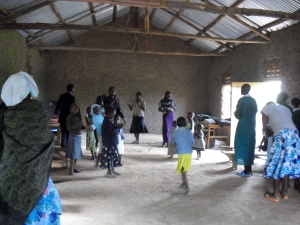 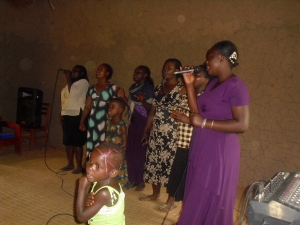 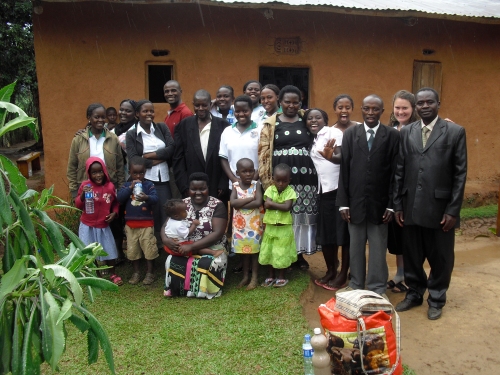 After a big meal, and adjusting the luggage to get it out of the rain, we headed back home.  On the way, we stopped by the family of two male ABIDE alumni, who offered us sodas and sweet bananas.  (Hospitality is a must!) Somehow we gratefully packed it into our full stomachs, then were on our way.

It was a good, full, and exhausting weekend.  May God be glorified through our efforts to teach His Word and truth to people we encountered.  Thanks for your prayers!