I was invited to meet a family that lives nearby.  God has definitely shown His mercy to them, and proved that He is with them, despite incredible turmoil.  After meeting the mother and three children, I had tea with the mother and her oldest daughter as she shared their story.

Let me tell you about Mbabazi, Queen, Emmanuel, & Mercy…

Mbabazi (which means grace) and her husband ,Juma, were Muslims.  Some time after they had been married, Juma became mentally ill.  He became more and more aggressive over time.  Sometimes Mbabazi would take the children to her sister’s home to escape from his violence, but he would always find them.  February 28, 2000 is a night that will never be forgotten for this family.  At this time they already had three children ages seven, five, and five months.

Around 10 in the evening the husband became very violent.  For some reason, he seemed intent on killing his family.  He began with the five-month-old son (Emmanuel).  This father began attacking him with a knife.  As Mbabazi saw her baby being cut up, she covered him with her own body, thus receiving the blows herself.  Juma even tried to strangle his wife, and threw her against a wall.

Meanwhile the seven-year-old boy (Aled), and five-year-old girl (Queen) were in another room.  Juma went for them, while the mother went into the bush with the baby, and passed out for awhile.  The father attacked his other two children, beginning with Queen.  After cutting her body multiple times, he was sure he had killed her, so he attacked his eldest son.  Aled was cut severely, and once he was dead he was put in a bag, and thrown into the pit latrine (outhouse).

Bleeding severely, Queen crawled to the neighbor’s house.  The neighbors were her uncle and aunt (her father’s brother).  A few hours later, Mbabazi woke, and returned home, finding no one.  She went to her brother-in-law’s house to find Queen and learn what had happened.  While she was away, Juma was caught and taken to the police by his brother.  Then Mbabazi, Queen, and Emmanuel were taken to the hospital.  The doctors and nurses thought they would surely die from their injuries.

They spent three months in the hospital, not to mention many return visits after that.  Mbabazi remembered that when they arrived that night, there was so much dried blood on her body that they had to remove it with a razor blade.

Some neighbors destroyed the house where all of this violence took place, in fear that Juma would return.  They burnt it down, but did not bother to remove any of the belongings inside, leaving them with nothing.  Thankfully, their family members (the uncle and aunt) took them in for a few years, and helped them.

At one point during the investigation, Mbabazi’s husband was released from prison.  During that time their last born, Mercy, was conceived.  However, the community did not like that a mentally ill man had been released, and convinced the police to put him back in prison, so he returned after four months of freedom.

For some reason he was released for a very short time again in 2011.  During that time, he asked his wife why he was in prison.  He did not remember that night, eleven years earlier.  She graciously explained to him what he had done.  Through this the family was able to see, as Queen said to me, that it was not him who did it, but Satan.  After this time, Mbabazi gave her life to Christ, leading to the change in her name (remember, Mbabazi means Grace) as she left the Muslim faith.

After becoming a Christian, her brother and sister-in-law kicked them out of the house they had been staying in for eight years.  They ended up finding themselves living with some orphans for awhile.  Eventually they moved themselves to a plot of land they owned, but that had no house on it.  Mbabazi gathered some sticks and a tarp, and created a shelter for them.

One of Juna Amagara Ministries’ staff members and his wife (Herbert and Sarah) noticed that this woman and three children were staying there.  A singles Bible study group from their church decided to build them a house.  So, a mud house has been built about six months ago.  They have since begun an addition, but it is not finished.  Even so, this home has been an incredible blessing! 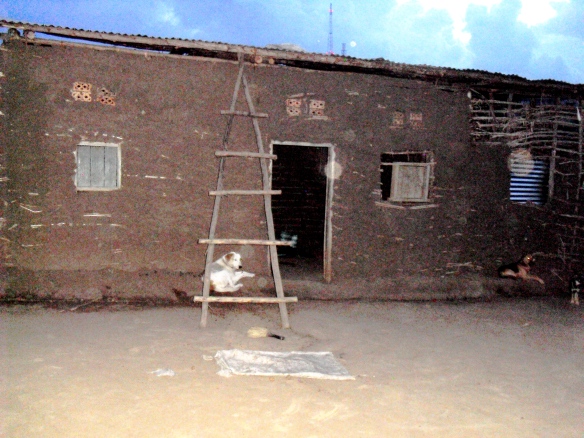 The father of these children is still in prison, and under a death sentence.  But what is amazing, was hearing both Mabazi and Queen talk about it.  They have clearly forgiven him.  They do not hold onto anger or bitterness.  They even talked about the idea that maybe they could get his death sentence removed.

The children have been able to go to government schools as their mother sells things like sweet potatoes, cassava, etc.  These schools are fairly inexpensive, but rarely provide good education compared to private schools.  Currently, the government schools in Uganda are on strike.  Since Queen has joined secondary school, she has been blessed with various family/friends offering to pay for one term at a time.  Each year has three terms, and after the current term, she only has one year left before graduating.  She doesn’t know how she will go to school next year, but is trusting God to provide.

The new (and last) school term of the year just began in mid-September, and Herbert decided to see if Mercy could come to Juna Amagara’s school.  But Emmanuel insisted he go to school with his sister.  Herbert approved it, but asked Mbabazi if she could at least pay for food for the children (schools in Uganda provide breakfast and lunch for students as part of the school fees). Her response:  They weren’t eating lunch at school in past, so they don’t need to eat it now.  Of course Herbert could not agree to that, so he insisted JAM provide meals for them.  When they asked what they think of their new school, Emmanuel was quick to say the teachers are good and he gets to eat lunch.  Mercy was happy with the good behavior of the students, as they were treating her well, unlike previous experiences.

As we finished up our conversation, Mbabazi could do nothing but praise God for how He has cared for her family.

Now these children need sponsors in order for JAM to continue caring for them, and providing them with education and meals.  Would you be willing to be Christ’s hands and feet, demonstrating his grace and mercy, showing that He is indeed with them? 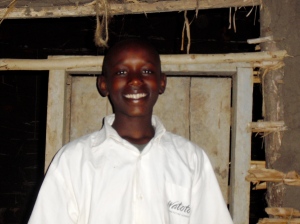