Once upon a time in a little village deep in the hills of Uganda, twin boys were born.  Unfortunately, they were unwanted.  Their mother neglected them severely.  They were rarely eating or being taken care of properly.  An uncle and his family took them in for a little while, but it became evident that the twins were too much for his family to handle.

That’s when Juna Amagara Ministries came in.  (This is why Juna Amagara, which means saving lives, is such a fitting name for this ministry!)

Soon three ladies (three generations: grandmother, mother, daughter) learned about these young boys and decided to come together and sponsor them as a family.  What an incredible blessing!  Their investment has made it possible for these boys to have a home, attend school, eat regular meals, receive medical attention, learn about Jesus, and so much more.

I met Kato and Kakuru in June (their names mean younger and older respectively, typical Ugandan nicknames for twins).  They clearly were still displaying some behaviors that naturally come as a result of such a horrific beginning to their lives.  So, since I was living in the ABIDE house at the time, which is on the same property as the children’s home, I realized that God wanted to use me to offer some extra love and discipline to help these twins.

I have been so blessed to be used by Him, and have seen major growth (in basically all areas) over these many months.  Most people around here refer to them as my sons.  Indeed, I really do love them, and tell them so often!  It’s a combination of the little things that make a big difference: offering band-aids, teaching them to apologize and forgive, reading Bible stories, sharing food, tickling little armpits, practicing identifying colors, and more.  A few weeks ago I was talking to them about their futures, and Kato wanted to make sure I didn’t forget that they would attend ABIDE after high school!  Love it!  Whenever we read a Bible story together out of a children’s Bible that I have, we pray afterwards.  I always ask who should pray, even though they always say I should be the one.  It warmed my heart the day Kakuru volunteered to pray when I asked my regular question.  Precious.

I just found out a couple days in advance that today is their birthday.  They are six years old today.  Yesterday, when I was at the children’s home, I told them the special news…Birthdays in Uganda are often unknown and rarely celebrated.  A shy little grin crept onto their faces as they learned about their special day.  I baked a cake to share with them and the other children in the house.  I had a couple things lying around my house that I can give as gifts (considering the birthday-culture, I don’t want to overdo it).  But I did run to town to get something that I know they will be excited about:  new toothbrushes and toothpaste.  That might seem like a lame birthday gift to most six year-olds…but I am confident that they will appreciate it.  Later today I will distribute the goods.

When my friend Kate was here last week with a nice camera, I asked her to take a picture of me with my boys.  She took 87, most of them in the rapid-speed setting.  You see, these boys are active, to say the least.  Getting a picture of all three of us looking at the camera with good smiles is not easy…but I will admit that I am the problem in several of the pictures too, not just the twins!

Here are some of my favorites from that photo shoot.  Except for the image quality, they are not exactly great pictures from most standards…but they make me smile. 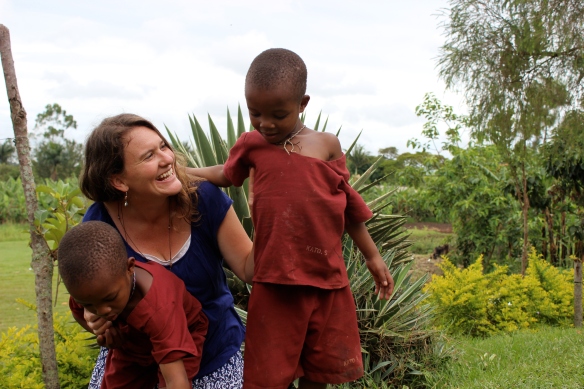