*WARNING: Some pictures at the end of this post are not suitable for those with weak stomachs. I’m sure some other crazy people will enjoy them.

Sometimes people give me gifts…often in form of food.

Personally, I think it’s great. I mean, plenty of times in my life I have received gifts from people that I really don’t want or know what to do with. But food is a gift that is practical and easily enjoyed.

The only probably I typically face with this generosity is not being able to use the food fast enough. You see, as one person who lives alone, and has lunch provided at work every day, I do not I some too much at home! And of course, the food given is often fresh produce. So…I often end up “re-gifting” some of it to friends, coworkers, and neighbors.

And that isn’t quite all of it…

Since my first visit to Uganda in 2010, the Holy Spirit convicted me to help an ABIDE graduate with his university fees. When I had left the country, he had no way to pursue furthering his education. I didn’t say anything, but just prayed, and eventually sought the opinion of the ABIDE Director. I decided to sponsor his college education (four years have been less than what I paid for one of my own in the US over a decade ago). Well, my brother John Jude, usually called JJ, has official finished his final exams, and expects to have his graduation ceremony in the fall. (Ugandan universities are a bit different than American ones in that way.)

(That’s the most recent picture I have of the two of us…following giraffes last December.)

Anyway, JJ’s mom came from the village to take care of some things in town…including dropping off that enormous gift for me, to show her gratitude for my investment in her son’s life. I received avocados, yellow bananas, small bananas (kabalagara, or what I call sweet bananas), matoke (unripe bananas that you cook as a starch), potatoes, and a live chicken.

That’s right, a live chicken (a rooster even) with legs tied and put in a grocery bag, with his head out. I couldn’t even pick him up. I don’t know…birds kinda freak me out for some reason. I couldn’t carry everything home, so I had to call a boda friend to pick it up for me and deliver it to my house on his motorcycle. (He received payment by way of food that day.). I didn’t know what to do with the chicken…eventually he shimmied his way off my back step. I wasn’t about to put him back where he started. 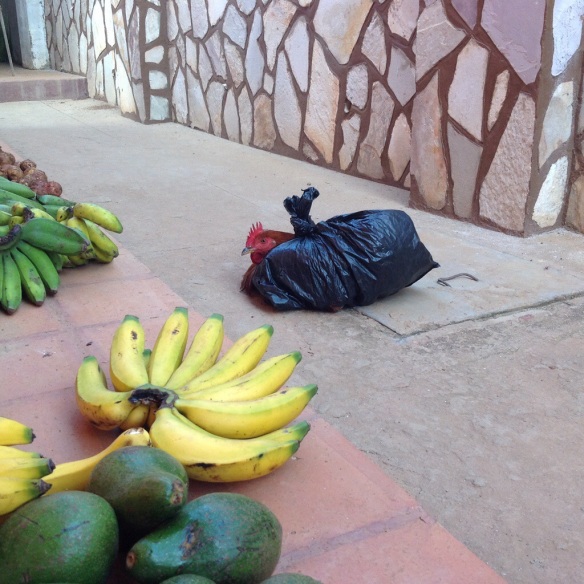 Eventually the chicken made his way back to Juna Amagara, and I had the cook at the children’s home, Mushanga, help me out with slaughtering. I didn’t participate at all. I watched, took pictures, and carried the pan. It wasn’t as gruesome as I expected, and he was quite quick. There was no chicken running around with his head cut off, because Mushanga stepped on his feet. And dipping the bird in boiling water before plucking? Total waste of time and water when you have Mushanga around…he just plucked them right out…after letting the blood drain out the neck of course. He held the naked bird over the fire for some reason…I’m still not sure why. Upon my request, he opened the little guy up, and removed all the organs. Mushanga kept something for himself when I said I wasn’t going to take those parts of a dissection-gone-wrong home with me. I also let him keep the neck. I know, I’m really generous. We also kept the head and feet by the request of our Kenyan ABIDE student. Gross. It turns out Mushanga could be a butcher, cutting up the different pieces and everything. I sent some of the chicken home with a coworker for her family. (There are some pictures of the process at the end of this post.)

Then I had chicken for a few meals. I decided to use some of the things in my kitchen that had come from America for this special gift. I had chicken tacos (kinda) with Spanish rice, chicken with Mrs. Dash spices, chicken and Stove-Top stuffing casserole…. 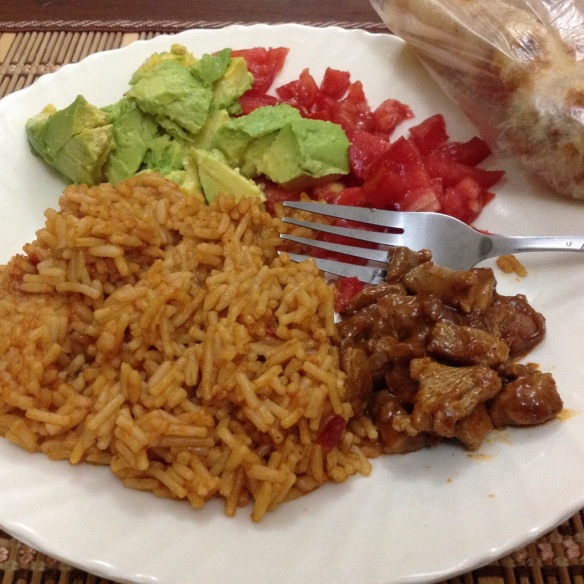 I will admit…sometimes it was a bit weird to think about cutting up the meat of an animal that had been sitting outside my house a few days before. Especially when sometimes it seemed like I was smelling the same scent from when it was sitting there…Even so, I enjoyed this gift. I know that, culturally, giving someone a chicken is one of the highest forms of appreciation (just under a goat or cow…which are used for parties and dowries). 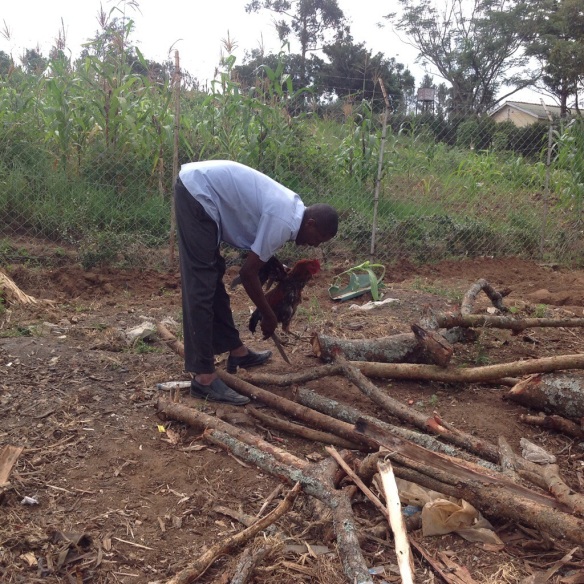 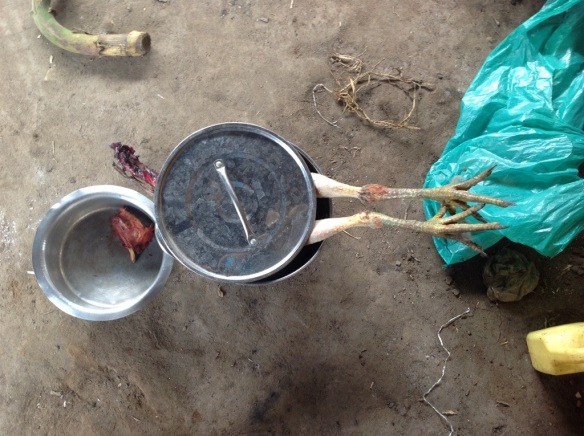